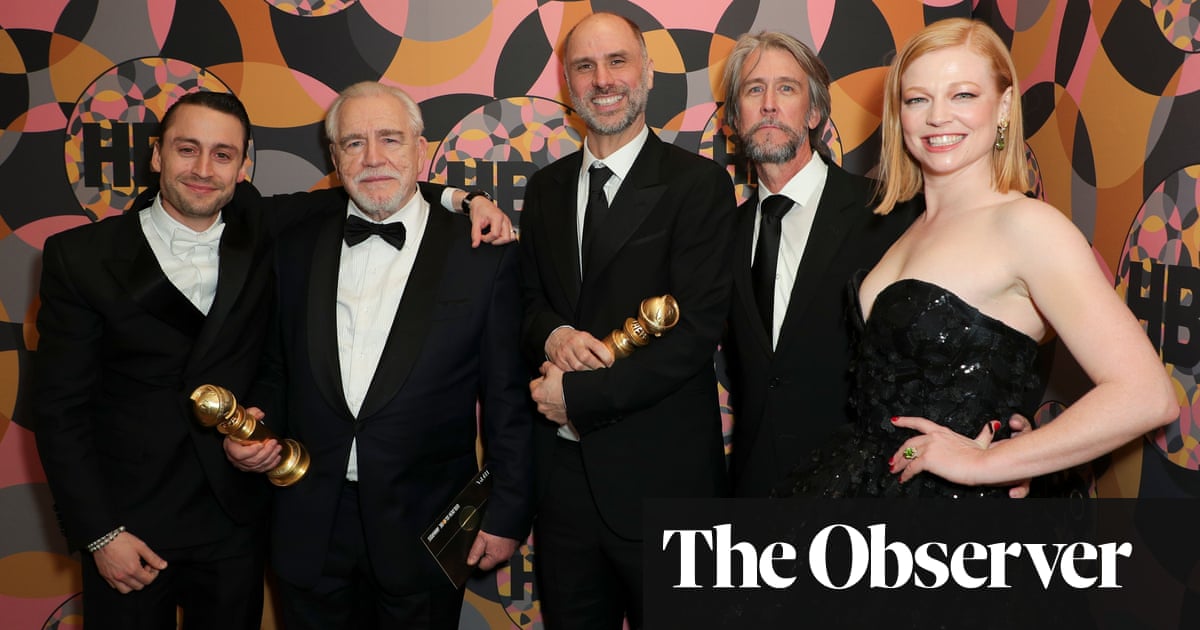 Succession returns: how did a nice lad from Oswestry make such a nasty TV show?

As the British writer’s tale of a media family’s power struggle returns to TV, we chart his path from Peep Show to global award-winning fame

Pulsing away unobserved, inside a room near Brixton underground station, is the heart of a callous transatlantic empire. From this modest south London location, a web of intrigue, corruption and betrayal spins out across the world, to say nothing of costly schemes for leasing superyachts and mansions.

This is the room where Jesse Armstrong leads a pack of fellow writers, half of them American, half British, as they shape the storylines and dialogue of one of the most critically acclaimed American drama series of recent years: Succession.

Back for a third outing this month, Succession is the tale of a wealthy family with no creed other than the love of power. Headed by Logan Roy, a billionaire mogul played by veteran Scottish actor Brian Cox, it follows a handful of characters as they each jockey for position in impossibly bleak circumstances; they have all had the bad luck to be born the children of an immensely rich and influential man.

In creating Succession, Armstrong, perhaps still best known in Britain for his work with Sam Bain on Channel 4’s popular comedies Peep Show and Fresh Meat, has brought an unsettling cloud of malevolence into the homes of viewers. Evil, served up Roy-style, can almost be tasted: a mix of single malt, new leather and brimstone. Succession is funny, like Armstrong’s early shows, but it is also truly nasty. Surprising, considering the fond way the people who work with him seem to feel about him.

Playwright Lucy Prebble, who writes for Succession, begins by selecting from a long list of Armstrong’s attributes. “There are many things I admire about Jesse,” she says. “He wears his intelligence lightly, which sounds like an insult, but it isn’t.”

His taste, professionally and personally, Prebble adds, is “exquisite”. “I don’t mean in clothes or art or something, he’d feel that too flashy; but in people, in opinion, in judging the moment. It’s rare to know someone who has great taste but is also so fundamentally protestant. His intelligence is lacerating but mostly inwards, which is always my preference.”

David Mitchell, star of Peep Show, suspects Armstrong’s knack for ruthless observation and his comedy both come from his deep appreciation of the absurd. “Jesse has an extremely strong sense of the ridiculousness of people,” he says, “which is why his writing combines warmth, savage satire and hilarious daftness so well and so surprisingly,” he said this weekend. “He is a very kind and very funny man – the two attributes don’t often coincide – who is an enormous pleasure to work with and spend time with.”

Fans of Succession will have their favourite Roy family member, or in this case, their least worst. Siobhan, the only daughter, is a cool powerhouse of machiavellian disdain. Kendall, the original heir apparent, is dysfunctionally thwarted, while Roman, the baby of the brood, is feckless and opportunist.

Nice bunch. And that is without mentioning Connor, the affected, dopey elder brother with aspirations for high office and a deluded, fey girlfriend. Nor Siobhan’s husband, the unfortunate Tom Wambsgans, peerlessly portrayed by Matthew Macfadyen, and his sidekick, Greg, a hapless, ambitious great nephew. All of them share base motives, jostling for preferment inside a vast fictional organisation inspired by the Murdoch empire, but also heavily influenced by the history of Robert Maxwell’s family and by the argy-bargy atop the late Sumner Redstone’s US media conglomerate.

It is all a far cry from Armstrong’s own background in Oswestry on the Welsh borders, where a private jet is rarely spotted and the helipads are few. Here Jesse was raised by a mother who worked in nursery schools and a father who taught in neighbouring colleges.

Yet the unswerving eye and trademark brutality of Armstrong’s writing was there in the first scripts he wrote for Peep Show in 2003 with Bain, a fellow Manchester University student, where Armstrong also met his wife. In this sitcom, which went on to become C4’s longest running, Mitchell and Robert Webb play mismatched flatmates who are spared no humiliation. The two writers, who shared a house together as undergraduates, also drew on painful personal experience when constructing the cringey scenes in Fresh Meat.

If Armstrong could switch with some assurance to chronicling chicanery inside the political bubble, writing for Armando Iannucci’s parliamentary parody The Thick of It and for his 2009 film, In the Loop, it is probably because of an uneasy time he spent inside the Palace of Westminster after university. Armstrong worked for the former Labour politician Doug Henderson, but he never felt at home.

Aside from an abiding sense of discomfort that leaks into his work, the writer is known for his self-deprecating humour. This could well be part of his own succession story; a legacy inherited from his father, David, who became a novelist and then a literary agony aunt for others seeking publication.

Armstrong senior is the author of a string of crime thrillers, yet his biggest hit to date is a candid book of advice for wannabe writers. How NOT to write a novel: Confessions of a Mid list Author sold well, and set him up as a guru for all those handling repeated rejections from publishing houses. The two writers use each other as sounding boards. “He is very reliable and honest without being hurtful,” David has said.

Asked how it feels to write a really good scene, Armstrong junior is similarly without ego. It would, he has judged, be “a bit disgusting” to revel in such a moment by talking about it later. There is however real nerve in his creative approach. He always wants to know what is happening in a scene, he told the New Statesman last week, and so he steers away from cheating with ambiguities. “There needs to be an answer,” he has said. “The show has a view of how the world works and how people work, and that should be expressed in every single line and frame of the show, but it should never be explicitly stated, otherwise it would be turgid propaganda.”

At the same time Armstrong, 50, is relaxed enough to admit he is not in control of the show’s ultimate meaning for viewers: “It is possible we don’t know what we are making.”

Prebble has seen this humility in the writers’ room. She says Armstrong’s ability to admit when he does not know has helped her to do the same. “He’s faintly embarrassed to be making art, and realistic about the good it can do. The biggest thing we’ve ever said about the show was once at the monitor watching an amazing take of one of the most famous scenes in Succession, and Jesse said, ‘Actually, that’s all right, I think. Yeah?’ “And I said, ‘yeah.’ And that meant ‘We’ve created something really meaningful and we’re so proud, and I hope we all know each other for ever.’”

Of course, the entertainment industry is not really a destination for the shy and retiring. Prebble suspects Armstrong would probably argue that “his megalomania is just well hidden, which is an excellent way of hiding it further, if indeed it exists”.

Both Mitchell and Prebble also note the vigour of Armstrong’s efforts to get a scene right. “He tries to keep things specific,” says Prebble. “When he watches an edit he might say, ‘If I was the sort of person who liked the show Succession, and I suppose I sort of am, I think I’d probably enjoy that.’ And that’s high praise. He finds all the right things distasteful, but is too polite to say so.” Sometimes this means throwing material away.

“He finds real joy in jokes,” recalls Mitchell, “but is also a rigorous rewriter who believes that, however funny the scene he’s written may be, it can always be improved.”

If all this paints a slightly daunting picture, that would be unfair. According to Prebble, as well as enjoying karaoke, Armstrong is an “appallingly happy” colleague in the mornings. “Getting into a set van with him first thing is like downing an antidepressant with an espresso.”

He is also, she attests, “very, very silly, which is the only humour worth anything”.

Prebble sums up with a seal of approval stolen from Armstrong’s own understated phrasebook: “He is a very good egg.”