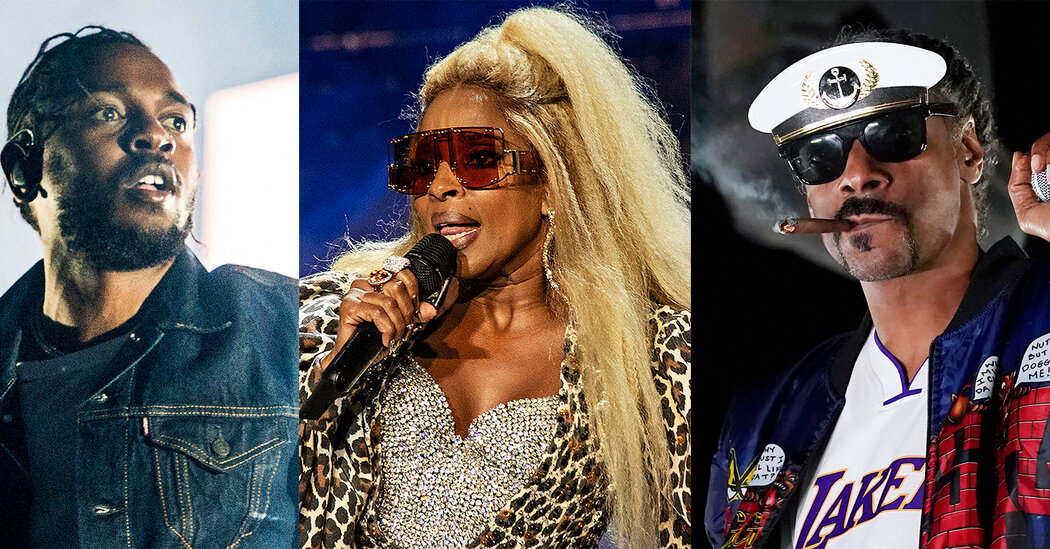 The N.F.L. announced Thursday that five performers would share headlining duties at the Super Bowl, with a distinct nod to West Coast hip-hop given the game’s location at SoFi Stadium in Inglewood, Calif. Three Southern California natives and rap titans — Dr. Dre, Snoop Dogg and Kendrick Lamar — will take the stage alongside Mary J. Blige and Eminem during the halftime show scheduled for Feb. 13, 2022. The game will air on NBC.

“The opportunity to perform at the Super Bowl Halftime show, and to do it in my own backyard, will be one of the biggest thrills of my career,” Dr. Dre said in a statement.

The halftime show for Super Bowl 56 will be the third produced by Roc Nation, the entertainment and sports company started by the music impresario Jay-Z, as the N.F.L. pushes to modernize the show and appeal to a more diverse audience. Jennifer Lopez and Shakira were dual headliners of the 2020 performance in Miami Gardens, Fla. The Canadian pop superstar the Weeknd performed at halftime of February’s Super Bowl in Tampa, Fla., before a crowd limited by coronavirus pandemic restrictions. He reportedly spent $7 million of his own money on the production, in part to ensure that the spectacle would wow TV audiences.

Organizers said the expected return of the Super Bowl’s usual capacity crowd at SoFi Stadium, the $5 billion venue near Los Angeles International Airport that opened in 2020, would restore energy to the festivities.

“This year we are blowing the roof off the concept of collaboration,” said Adam Harter, the senior vice president of media, sports and entertainment at PepsiCo, which sponsors the show. “Along with the N.F.L. and Roc Nation, we continue to try and push the limits on what fans can expect during the most exciting 12 minutes in music.”

The Super Bowl is typically the most watched broadcast of the year, despite ratings declining in five of the past six years, notably among the advertiser-coveted demographic of people aged between 18 and 49. In February, 96 million people watched the Super Bowl between the Tampa Bay Buccaneers and the Kansas City Chiefs, the game’s smallest audience in 15 years, despite the N.F.L.’s biggest star, quarterback Tom Brady, leading Tampa to victory. That decrease was in line with overall drops in viewership for sporting events held amid the pandemic.

If advertiser interest is any indication, though, this season’s Super Bowl could mark a resurgence. NBC said earlier this month that it had nearly sold out of Super Bowl advertising spots, which cost a record $6.5 million for 30 seconds.